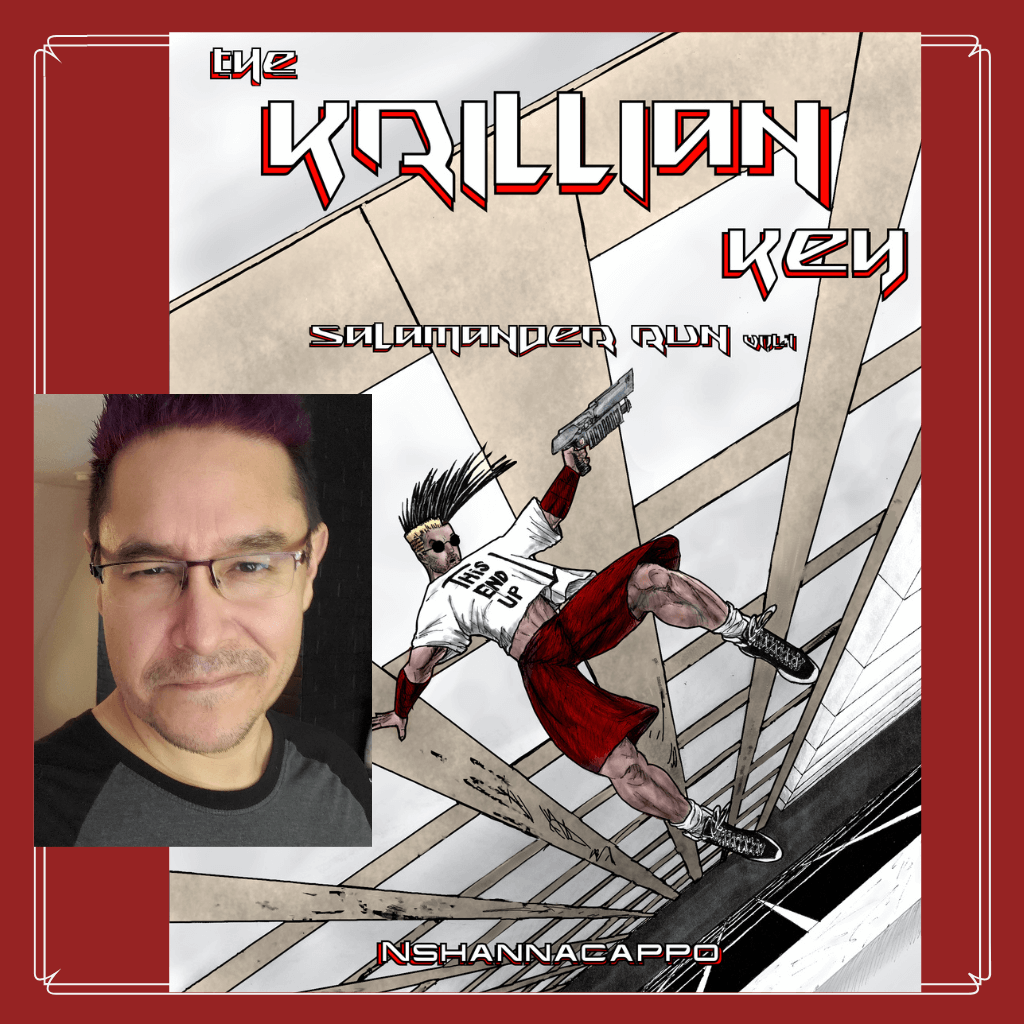 It’s hard to believe it’s been a whole year, but here we are at the anniversary of the publication of The Krillian Key: Salamander Run, a graphic novel written and illustrated by Neal Shannacappo.

The story, which is only the first volume in a planned series, is about Kyrill, also known as Salamander, who is an immortal living in a post-apocalyptic future circa 2242. There are flashbacks to modern-day Canada, and the mysteries surrounding Salamander’s birth. More than 200 years later, Salamander finds himself pursued by warring factions of alien hybrids who want to either save him or use him to fulfill their ominous plans.

The Krillian Key has fast-paced, over-the-top action and fight sequences along with deeply reflective moments about the main character’s past and his roots in Indigenous culture and spirituality. It is fun, exciting, and touching in equal measure.

On the one-year anniversary of its release, we caught up with Neal, who spoke with us about the book and his more recent work, and offered some insights into the world of Indigenous graphic novels in general. Here is our conversation.

Kegedonce Press: The Krillian Key was your first published graphic novel that was entirely your work, both story and illustrations. How did working on it compare to other works you have done?

Neal Shannacappo: It didn’t feel like work, it’s a story that I know very well and have always enjoyed working on it. The new challenge was bringing out what is inside my head and putting it onto the page in a way that made it all make sense to the reader. I had long suspected that I was too close to the work for someone new to the story. Working with Jennifer Lum, my editor, was really great and with her help I was able to figure out a way to make it all come together without sacrificing content. I rewrote the beginning, and illustrated the history of the world since Salamander’s birth and then changed the ending. So working on The Krillian Key was comfortable and yet at the same time a challenging experience, one of the harder parts was cutting out the car chase to make room for the new beginning and a streamlined story.

KP: What has publishing The Krillian Key led to for you? What else has been going on for you in the past year as a writer and illustrator?

I’ve been invited to guest lecture a few times at various universities, thank you to Zoom and the pandemic for making that a viable reality. I’ve spoken on a couple of panels about comic books and graphic novels which were pretty rad. I taught a month long weekly series of workshops on graphic novels and throughout it all I’ve developed some pretty interesting and solid relationships with Indigenous and non-Indigenous communities that I would not have made otherwise. I’ve been writing short stories all set in the Krillian Key universe for a couple of Indigenous graphic anthologies and getting The Krillian Key out there led to my being asked to turn the novel Land-Water-Sky Nde-Ti-Yat’a by Katha into a graphic novel.

KP: What are you reading right now or looking forward to reading this year? Are there any graphic novels or author/illustrators that have inspired you?

I’m reading Certain Dark Things a novel by Silvia Moreno-Garcia that is about vampires in Mexico City, I’m just finishing up the first couple of chapters and the protagonist has met and been fed upon by the main vampire named Atl. So far it’s not like western vampire stories and I really enjoy that about it and I’m looking forward to continuing the book. I’ve started two graphic novel series called Invisible Kingdom and Descender, respectively.

KP: Indigenous literatures have gained a lot more attention lately. What changes have you noticed in the realm of Indigenous graphic novels?

It feels like we’re starting to take control of our narrative across the board and that feels amazing. Growing up there weren’t very many opportunities to see Indigenous people in books or graphic novels that were by us and for us. I remember cheering in the Denzel Washington movie The Magnificent Seven remake when he spoke an Indigenous language with the character Red Harvest played by Martin Sensmeier. That was a significant moment in cinema, and recognizing some of the words spoken was amazing to hear and see on the big screen. Indigenous voices in sci-fi are incredible to read and finally see our stories and our way of telling a story in print and on screen; we’re main characters and not tokenized in the background of someone else’s story where the author/creator isn’t Indigenous. Seeing all the Indigenous graphic novels out there is a dream come true and then being part of this experience is mind-boggling because it sneaks up on you even though you’ve lived the experience.

KP: Where do Salamander and the Krillian Key series go from here?

Salamander can be seen in the Indigenous werewolf anthology called A Howl, in a short story which takes place the moment after Julian has entered the delivery room, and introduces werewolves into the Krillian Key universe. After that there are a couple of short stories, I’m nearly finished for the Water Protectors League anthology. The Krillian Key volume two starts off a week before Salamander is born and tells the story of how Julian came to find himself standing before the delivery room. There’s more history of the solar system and how the hybrids fit into the story of humanity, and then we catch up to Salamander mid car chase. The second volume will world build on the connection between Indigenous peoples of earth as well as further develop the alien threat facing our solar system.

KP: Miigwetch, Neal! We are so looking forward to Volume 2!

You can read the All Lit Up feature on The Krillian Key, in which the graphic novel is imagined as a movie!

Check out Neal’s Patreon site here or visit him on Facebook.

Cover Story: Through the Eyes of Asunder

Neal Shannacappo writes about the serendipitous origins of the cover image for his debut poetry collection. "Aanii kina wiya! The art on the cover [of Through the Eyes of Asunder] was a serendipitous event that I discovered after one long night of inking some graphic...

Kegedonce Press celebrates our newest poetry collection, D.A. Lockhart's Go Down Odawa Way. "Lyric experiences from the rooted-class, steeped in the bloodlines of survival, posed on the verges of decolonization." —D.A. Lockhart. Poems that cross the boundaries of an...

On February 6, 2021, Nathan Niigan Noodin Adler launched his new book Ghost Lake. Since then, this collection of interconnected horror, urban fantasy and thriller stories has become one of Kegedonce Press's most acclaimed titles. Its first accolade was as a finalist...

A warm Kegedonce Press welcome to acclaimed Lenape poet, D.A. Lockhart, whose newest poetry collection, Go Down Odawa Way has just been released! If you know anything about Indigenous poetry in Canada, then it's a good bet that you have heard of D.A. Lockhart, author...

Amik, a delightful children's picture-book, is written and illustrated by Potawatomi educator and Juno-nominated artist Sharon King. Kegedonce Press is thrilled to announce the publication of Amik, our very first children's board book! With brilliantly colourful...