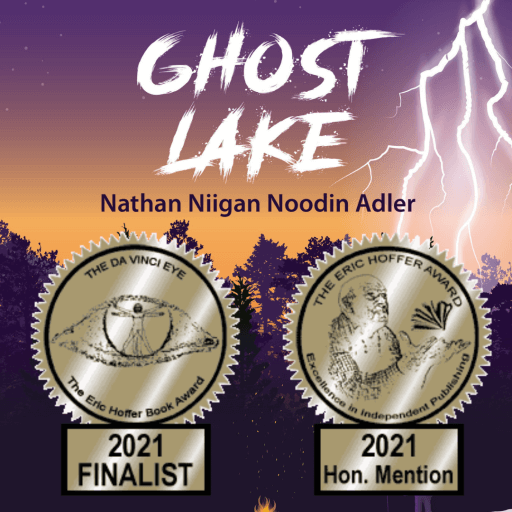 We are thrilled to announce that Ghost Lake has been awarded the 2021 Indigenous Voices Award in Published English Fiction! Earlier this spring, it was also listed as a finalist for the Eric Hoffer da Vinci Eye Award in book design, and received Honourable Mention in their Commercial Fiction Category. Congratulations to Nathan–this is a fabulous collection!

In their citation for Ghost Lake, the IVA jurors write: “We love these stories! Interconnected horror stories based on traditional Anishinaabeg stories all set on an eerie reserve aptly named Ghost Lake? Yes please. Every story surprises. An absolute page-turner, deeply engaging horror stories that leave you breathless. The sheer breadth and range of what Adler has accomplished here is impressive.”
`
In these pages are thirteen offerings from Ghost Lake (a fictional northern Ontario reserve), in which an interrelated cast of characters experiences brushes with the mysterious. Issa lives in fear of having her secrets discovered, Aanzheyaawin haunts the roads seeking vengeance, Zaude searches for clues to her brother’s death, Garion wrestles with his sexual inclinations, Fanon struggles against an unexpected winter storm, Kylie fights to make it back to shore, Eadie and Mushkeg share a magical night, Tyner faces brutal violence, and Tyler, Clay, and Dare must make amends to the spirits before it’s too late. At Ghost Lake, the precolonial past is not so distant, history informs the present, and nothing is ever truly lost or destroyed, because the land remembers.
Ghost Lake is a companion volume to Adler’s Indigenous horror novel, Wrist (2016, Kegedonce Press).

… Later that afternoon, Gar returns to the totem pole. None of his friends are hanging around. He does a sweep of the trees; the place is deserted. Perfect. He finds a secluded spot in amongst the bush where he won’t be disturbed. The land slopes upward from here, and he can see the carved faces maybe a thirty yards distance, hidden by the foliage from their knowing smiles. He doesn’t want any witnesses.

The fire starts off small.

He builds a little log cabin and teepee side by side, each about a foot wide. Stuffs in balled-up lines of ink on crumpled newsprint, then layers sticks in increasing size. He snaps branches into smaller lengths over one knee, and when that doesn’t work, positions one end raised on a stone, and stomps down to break it cleanly in the middle.

He wants to see which will burn faster, the log cabin, or the teepee.

He lights a strike-anywhere match on the same stone he used as an anchor point to snap branches, and then touches orange flame to bundled paper, here and there, around in a circle, so they catch from all sides. He watches with eagerness as the fire licks the edges of the paper, flaring green, and yellow, catching some of the smaller sticks, then the larger pieces of kindling, until finally the larger branches begin to burn, the warmth of the fire is matched by a growing warmth in his cheeks.

A familiar, welcome excitement fills him, a rush of euphoria, his breath comes faster and faster as if he is engaged in some activity more strenuous than simply observing. The growing heat is matched by a growing hardness in his jeans, and pleasant sensations wash through him. He loves this. Loves watching the fire grow, gathering momentum.

The log cabin caves in and topples, knocking over the teepee, creating one larger funeral pyre, the individual flames merging to create something larger and altogether more beautiful. He wants the fire to grow, bigger and louder, so the pleasant feelings will also continue to swell. Gar drags over larger and larger branches then stands back in awe as flames devour the timber. From the small seed of a matchhead touched to pieces of newsprint, he created this monster bonfire. The heat makes sweat bead on his forehead, but he won’t step back, refuses to back down, only turning aside to feverishly gather more wood, more logs, more fuel.

The branches of a neighbouring tree are arching over the inferno; they blacken and burn, two feet above the tips of the flame, the pyramidal shape creating a focal point of greatest heat, as the smoke rises and curls, spinning centrifugal, sparks pop and fly in all directions as the wind blows, feeding a steady supply of oxygen. The conflagration seems to breathe, inhaling and exhaling as it sucks in more air and the flames burn with greater and greater intensity, producing a steady sound, almost like a growl.

Gar moans. It’s so good. So good. He is close. So close. His eyes water from the smoke so he closes them as he listens to the fire snap and roar, feeling heat on his face, his arms, his chest, singeing his bangs. But he doesn’t care. His eyelids flutter, catching glimpses of the curling orange flames, and this only inflames him more, carrying him away.

“Ywaacgh!” Gar yelps as a sharp pain interrupts his climax. His pant-leg is on fire! He leaps back from the blaze, slapping at the folded cuff of his jeans. Oof! He falls backwards over a log, and lands flat on his back.

From this new perspective, he sees that the nearby tree with over-arching branches is now engulfed, like a massive piece of kindling. His scalp prickles with sweat. Maybe he let the fire get too big? He couldn’t just pee on it. It was much too much, too big for that to help now.

He scrambles back and watches the poor tree go up like a living torch, orgasm now overcome by the cosmic power. But something about the sight squares his shoulders, makes him feel the potential for strength in his muscles. This was his fire. The calf where his pant leg caught fire throbs like a reminder, alongside his sore foot from the rusty nail he stepped on earlier in the day, and he looks around to make sure he’s still alone. There is always something to detract from or ruin a near-perfect moment.