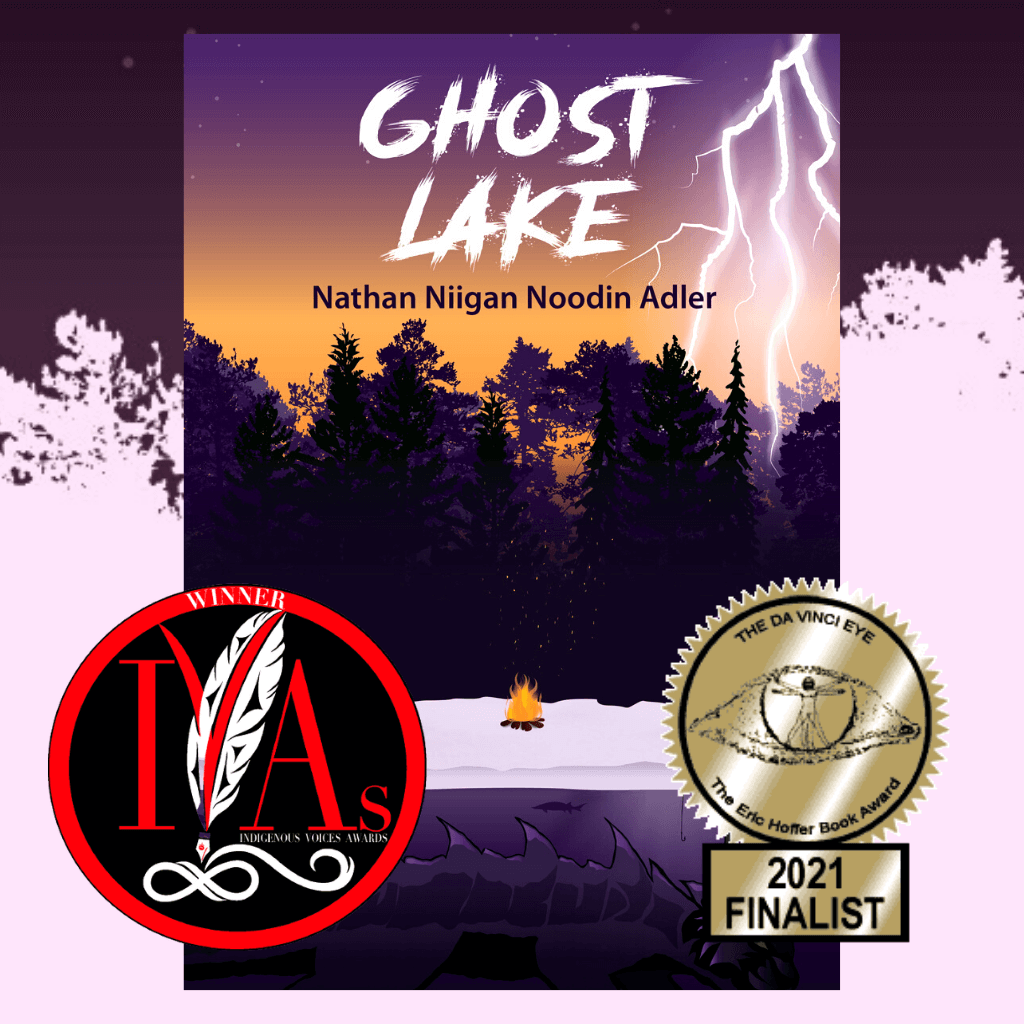 On February 6, 2021, Nathan Niigan Noodin Adler launched his new book Ghost Lake. Since then, this collection of interconnected horror, urban fantasy and thriller stories has become one of Kegedonce Press’s most acclaimed titles.

Its first accolade was as a finalist for the Eric Hoffer Da Vinci Eye Award in Book Design. The Eric Hoffer Awards also gave it an Honourable Mention in its commercial fiction category.

Then came the Indigenous Voices Awards in June, and we were absolutely thrilled when Ghost Lake won the IVA for Published Fiction in English!

In the summer, Ghost Lake was also shortlisted for the First Nations Communities Read competition.

It has also been a busy year for Nathan. From appearances at the FOLD Festival, the Black Museum, and the Naked Heart Festival (among others) to articles and interviews for Open Book, All Lit Up, and Rrampt, both Nathan and Ghost Lake have received a lot of attention! Nathan has also been teaching Writing Horror at Kwantlen Polytechnic University.

What an exciting year it has been!

For anyone just now encountering Ghost Lake, allow us to reprint here, for your reading pleasure, the comments from the jurors of the Erik Hoffer and Indigenous Voices Awards!

US Review of Books: judges’ remarks for the Eric Hoffer Award.

“This is a one way trip to true horror with a mystery needing to be solved. Following different characters and stories uncovers mystery, passion, vengeance, and a take on mother nature itself. There are thirteen stories in total, each with relatable characters with diverse goals and challenges. Yet, in Ojibwe, the land remembers it all. Adler has skills in storytelling that change the game, which tips the scale on how horror feels with page-gripping suspense and a good measure of problem solving until the very end.”

“We love these stories! Interconnected horror stories based on traditional Anishinaabeg stories all set on an eerie reserve aptly named Ghost Lake? Yes please. Every story surprises. An absolute page-turner, deeply engaging horror stories that leave you breathless. The sheer breadth and range of what Adler has accomplished here is impressive.”

Our congratulations to Nathan Niigan Noodin Adler
on this fantastic collection of short stories!

Ghost Lake is the companion volume to Wrist, the Indigenous horror novel that Nathan published with Kegedonce Press in 2016. The two books share some of the same settings and characters.

As part of the celebration of our 30th Anniversary, every month in 2023 we will be shining the spotlight on one of our amazing authors! We begin the year with Basil Johnston, esteemed Anishinaabe writer, storyteller, language teacher and scholar. Kegedonce Press has...

2023 has begun! This is a very special year for Kegedonce Press: It’s our 30th anniversary! The press began back in 1993 with the publication of My Heart is a Stray Bullet by founder and managing editor Kateri Akiwenzie-Damm. Kateri founded Kegedonce Press as a...

Winter is the time to curl up inside with a good book. This season, Kegedonce Press is making it easy with four special book bundles for the winter holidays. Because good books are better when they come in twos! We have selected pairings that fit well together, for...

Dedicated Indigenous Publisher Invites Manuscript Submissions. Kegedonce Press is seeking manuscript submissions from First Nations, Inuit and Michif/Métis creators based in the territories known as Canada. We are seeking submissions in the following categories:...

Cover Story: Through the Eyes of Asunder

Neal Shannacappo writes about the serendipitous origins of the cover image for his debut poetry collection. "Aanii kina wiya! The art on the cover [of Through the Eyes of Asunder] was a serendipitous event that I discovered after one long night of inking some graphic...

Kegedonce Press celebrates our newest poetry collection, D.A. Lockhart's Go Down Odawa Way. "Lyric experiences from the rooted-class, steeped in the bloodlines of survival, posed on the verges of decolonization." —D.A. Lockhart. Poems that cross the boundaries of an...

A warm Kegedonce Press welcome to acclaimed Lenape poet, D.A. Lockhart, whose newest poetry collection, Go Down Odawa Way has just been released! If you know anything about Indigenous poetry in Canada, then it's a good bet that you have heard of D.A. Lockhart, author...

Amik, a delightful children's picture-book, is written and illustrated by Potawatomi educator and Juno-nominated artist Sharon King. Kegedonce Press is thrilled to announce the publication of Amik, our very first children's board book! With brilliantly colourful...