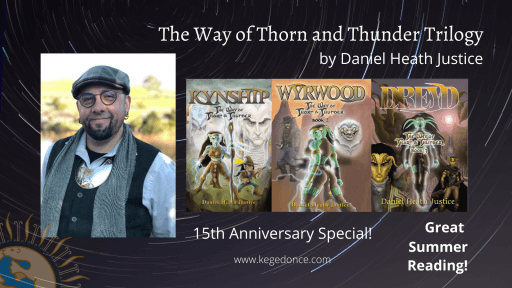 Beautifully written, intricately crafted, The Way of Thorn and Thunder series is an epic Indigenous
wonderworks (fantasy) series on the scale of Le Guin and Tolkien!

Kateri Akiwenzie-Damm, publisher and managing editor of Kegedonce Press, on The Way of Thorn and Thunder:

“It is our only trilogy and our first foray into speculative fiction. … I remember being completely astounded by it when I read the manuscript. There were so many elements that were exciting and innovative and that resonated with me as an Indigenous reader: the powerful female warrior protagonist, the belief system underlying the Kyn, the subversion of the ‘boldly go where no man has gone before’ tropes, the way that gender and sexuality are portrayed in such a natural and accepting way that is consistent with Indigenous cultural concepts, the power of the natural and supernatural. I felt validated and excited by all of that. I was also awed by the depth and magnitude of the world Daniel created in such incredible detail. It feels real and alive. When I finished reading it I remember thinking that it was why I started Kegedonce Press—to provide a stage for beautiful, inspiring, Indigenous literature that is grounded in Indigeneity, that decolonizes, and that is meticulously and lovingly crafted.”

Join Kegedonce Press and Daniel Heath Justice as we mark the 15th Anniversary of the publication of
Kynship, Book One of The Way of Thorn and Thunder.

The Way of Thorn and Thunder is now available as a
three-book bundle at a special price!