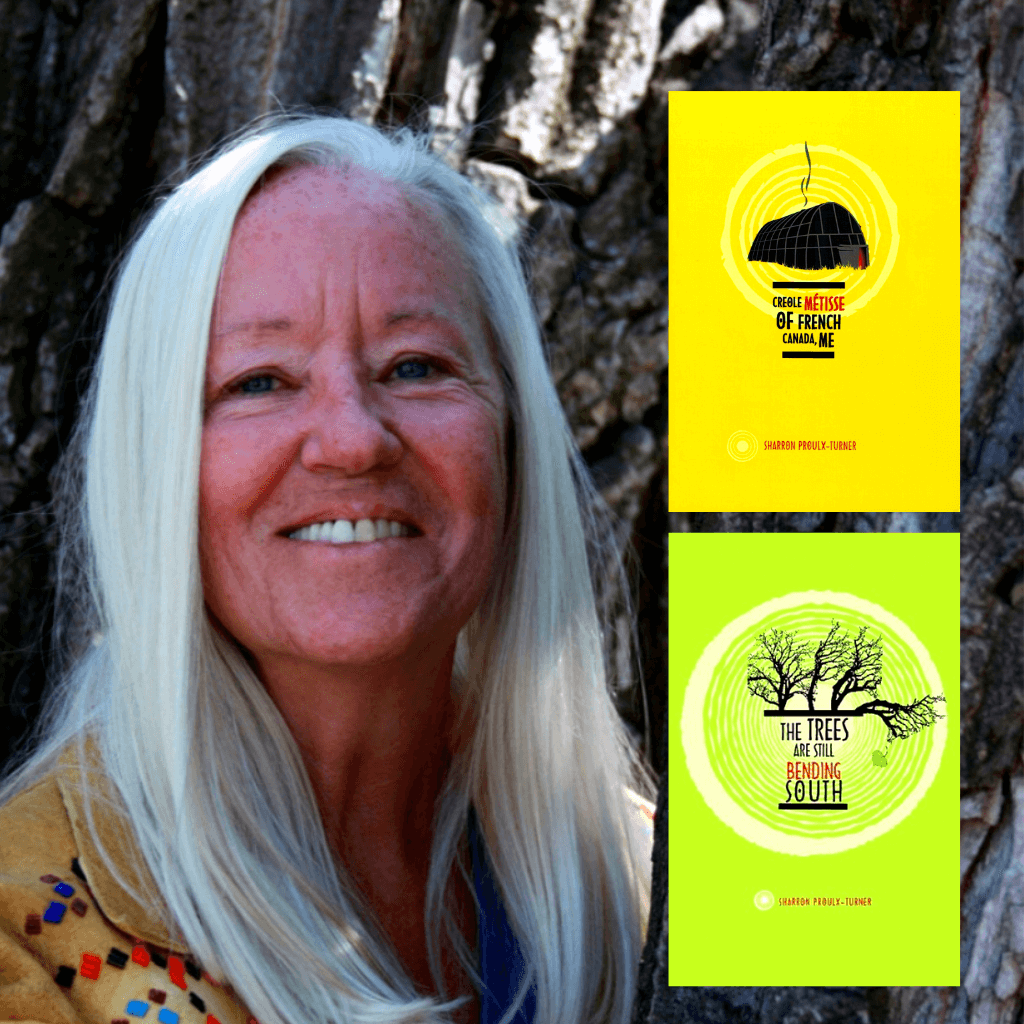 2022 marks a special dual anniversary here at Kegedonce Press: We are celebrating the fifth and tenth publication anniversaries of two remarkable poetry collections by writer and poet Sharron Proulx-Turner. the trees are still bending south was published in 2012 and creole métisse of french canada, me in 2017.

Sharron was from Mohawk, Wyandat, Algonquin, Ojibwe, Mi’kmaw, French and Irish ancestry, and was a member of the Métis Nation of Alberta. She was a two-spirit nokomis, mother, writer and community worker. She published several poetry collections and her work appeared in many other anthologies. She was nominated for the Edna Staebler Award for creative non-fiction and the Gerald Lampert Prize for poetry.

Sadly, Sharron passed away in 2016. Her last book, creole métisse of french canada, me was published posthumously, in her honour.

In celebration of the five- and ten-year anniversaries of these two powerful and moving poetry collections, we are offering a special on her two books. This special offer is only available on the Kegedonce Press website.

Read Sharron’s words, take a journey with her into the past and the present, into the life and the dreams of a truly talented woman.

A poetic memoir written in a unique, prose-like style. Sharron’s personal stories enable the reader to feel and to understand the ongoing effects of colonialism, the historic treatment of Indigenous people, and the experience of being a woman, Métis, and two-spirited in Canada.

“I wish I could be that brave. as brave as the big dipper. the great bear there, purring, watching, holding my hand. me looking to the side and down. the words I seek are buried there, under grief. inside the darkness of a cottonwood, inside the seeds of orange berries. the wings of a female mallard in flight, exposing blues and whites and blacks otherwise unseen, like a woman’s beauty, often hidden until she looks up, sees the small spaces between the leaves, yellow hearts on the black bark after a fall rain.”
—Excerpt from creole métisse of french canada, me

the trees are still bending south (2012)

In the poems in the trees are still bending south, the words of the English language burgeon with a different life, one lived on Turtle Island. Though it’s a girl, a lover, a grandmother, a mom, who’s telling these stories, singing these songs, her voice probing or celebrating the personal, the familial, the communal, the political, the mystical, her throat swells with the guidance of the Island’s other inhabitants – monarch butterflies, spiders, snow owls, the one-footed bodies of snakes – toward hope and wisdom.

—Excerpt from the trees are still bending south

Sharron Proulx-Turner describes her writing process. From “Acknowledgements” in the trees are still bending south.

“Before I sit down to write, I smudge and light a candle to honour the grandmothers and grandfathers who help me. Because quite a bit of my writing also comes from the grandmothers in my dreams and it is made clear to me what dreams are meant for my writing. I keep a diary. Not that I record my dreams as such, but keeping a diary keeps me fresh. There are times when a poem will come in its whole and I make no changes. There are times when a poem or a paragraph or a story will take literally years. The good news is, I always seem to know when they are done.”